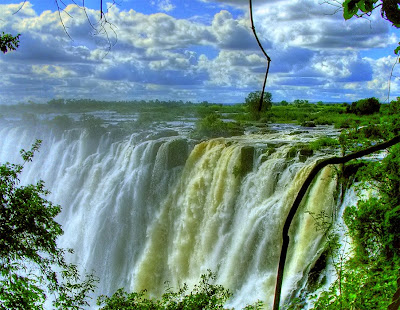 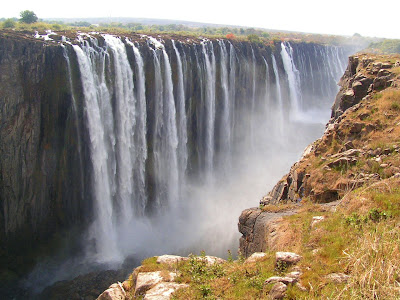 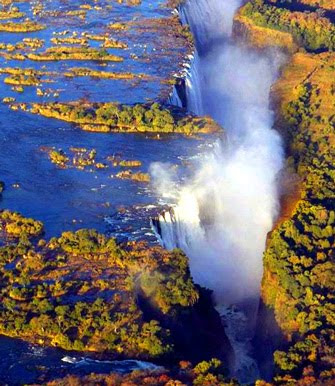 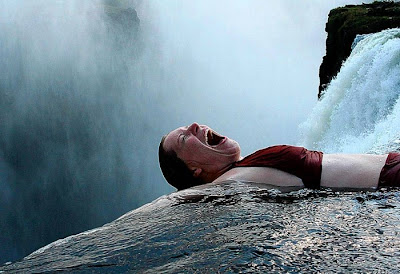 Victoria Falls is located on the Zambezi River, the fourth largest in Africa, on the border between Zimbabwe and Zambia. This is one of the world's largest, most spectacular waterfall and one of the seven world wonders of nature. Kololi tribe give the name to waterfall, who lived here in the 1800's, "Mozi-oa-Tunya" - "Smoke that thunders" Victoria Falls is a spectacular awesome beauty and splendor.

Victoria Falls extends to 1708 meters in width. It falls from a height of 120 meters into the gorge of 30 meters wide. The waterfall is formed by a sharp fall in the Zambezi in a narrow chasm carved by its waters in the zone of fracture of the crust. Numerous islets at the crest of the falls divide water into several branches. Manufactured waterfall dense fog and a thunderous roar could be viewed from a distance of approximately 40 km. Boiling pot at the beginning of winding gorge 80 km long, through which rushing streams of the waterfall, cross the bridge 198 meters long and 94 meters high. During the flood capacity of the water flow is around 546 million liters of water per minute.

But statistics can not be felt. It worth visiting the waterfall to make sure that the mighty Zambezi River cascade, rush into the Batoka Gorge, is the widest curtain of falling water on the planet.
David Livingstone first heard of the large waterfall in 1851, but only in 1855 decided to visit it. He spent the night on Kalai Island a few kilometers upstream from the Falls, went walking down along the river, and next morning went to a small canoe to meet the thundering smoke. He landed on the largest island on the edge of the waterfall, now called Livingstone Island and from there the first time saw the picture of waterfall. David Livingstone called the waterfall in honor of Queen Victoria. Local tribes called it Mozi-oa-Tunya, "thundering smoke". The waterfall is a part of 2 national parks and attracts many tourists.
With a resolution of the conflict in South Africa, in the region, a more politically sustainable, tourism is rapidly developing. Constantly there are new types of tourism activities, and the industry is becoming more developed. Traveling on a raft on the wild rapids below the falls were the first innovation more than ten years ago.
Victoria Falls is the world UNESCO site.
Posted by Sharon Hall at 12:06 AM