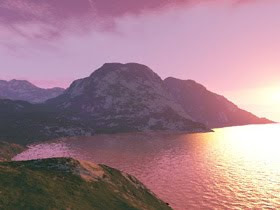 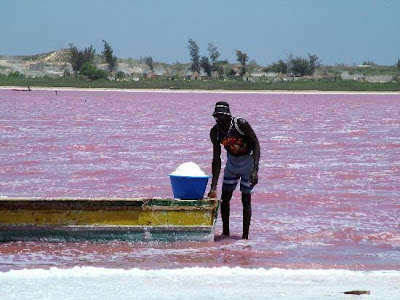 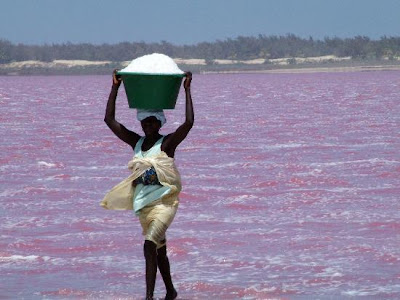 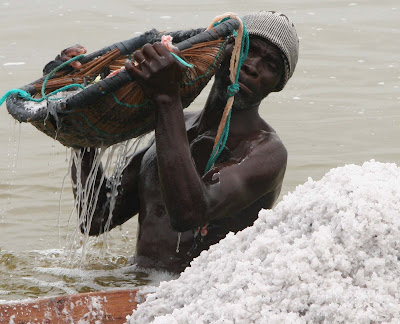 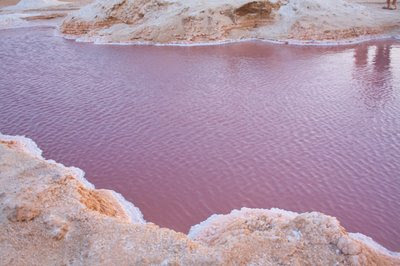 Pink Lake is really bright pink!
Pink Lake, or Lake Retba in local language Wolof tribe, - is a unique natural phenomenon and one of the main attractions of Senegal. The unusual color of the lake is connected with a high concentration of salt - about 380 gr. per liter, more than in the Dead Sea. At this salinity in the lake can not live any living creatures, except for special cyanobacterium, which produces a red pigment that contribute to the color of water. Color of the lake varies from light pink to brown. The intensity of color depends on the time of the day (from the angle of incidence of sunlight), from the clouds, and especially from the wind, because a strong wind cyanobacteria is activated and begins to produce more pigment.

Pink Lake is located 30 km from Dakar. Tour to Pink Lake - an integral part of all the tourist routes. The thrill you guaranteed! In the Pink Lake, as in the Dead Sea, it is impossible to sink. You can safely lie on the surface of the water, reading the newspaper.

Lake Retba famous by the fact that it is here for many years to finish a famous Rally Paris - Dakar.

Salt is mined in the Pink Lake, and white salt pyramid whimsically fram its shores. Locals mined salt, standing up to their necks in water. Men break the salt deposits are located on the bottom, special hooks, and then draw it from the bottom of spades and lace in the boat. To protect the skin from the corrosive action of salt, they are before you go to the lake, her brush with shea butter, extracted from the fruit of a tallow tree.

It now people are working, standing on the shoulders in the water - 20 years ago at the Pink Lake not swim, and went - there was water up to his waist. But digging about twenty-five thousand tons of salt in a year, people rapidly deepen the lake. In some places its bottom sunk very much - three meters and more. Very soon, removing the old salt is an old-fashioned way is no longer possible and the Senegalese authorities face the problem of employment of the Army feeding around the lake miners and traders. But while each morning dozens of half-naked men, taking uncomplicated equipment, swim out to the middle of the lake, put the boat on the joke and walk into the incredibly salty water ... salt solution of such concentration is capable of half an hour corrode the skin to such an extent that the deposition of the poorly healing ulcers. So before you get into the boat, miners are rubbing with oil. It is obtained from the fruit of a tallow tree, it is called the Scientific butirosperma Park ... This is why their body glitter in the sun ...

Salt of the boats is unloaded usually by women. These fragile-looking creations are wearing on the head a plastic basins filled with wet salt, weighing about 30 kg, and dump salt on the shore to dry. Initially, the salt extracted from the lake, has a dark gray color, but gradually turn white in the sun. In every pile of salt stuck to the plate number of the owner. Salt, extracted here, is mainly for export to neighboring African countries, but sometimes in expensive restaurants serving local fish baked in salt from the Pink Lake.

Salt miners live here, on the lake, in a small village in shacks made of scrap materials: reeds, tires and sheet metal. They come to work at the Pink lake from neighboring African countries and from the Senegalese province, and remain here more than a few years because of poor working conditions. However, they are well earned by African standards: every ton of extracted salt is sold for about 35 euros.

Because of the uncontrolled extraction of salt pink lake each year grows shallow. If no immediate action will be taken to protect this unique natural phenomenon, we risk losing him forever.

Near the lake there is a turtle sanctuary, where, under the supervision of biologists live in various types of marine and terrestrial turtles. In the reserve you can see the largest African tortoise, on the verge of extinction.
Posted by Sharon Hall at 1:06 AM