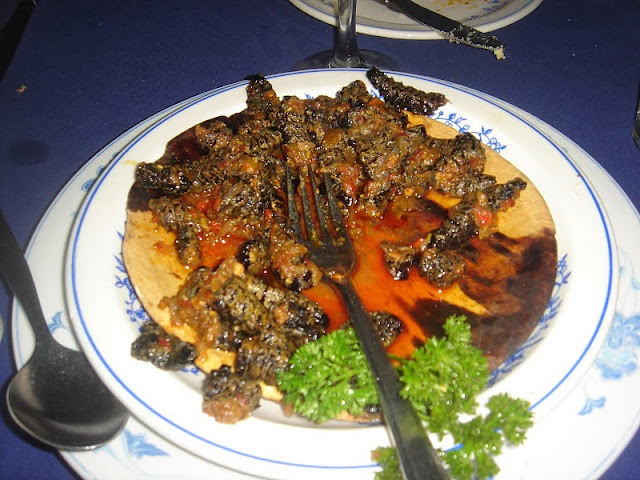 The Boma restaurant is a classic tourist venue set in the lovely grounds of the Victoria Falls Safari Lodge. Dinner at the Boma is a legendary affair, with what looks like literally hundreds of local dishes served in buffet style, including impala terrine and sadza. A witchdoctor is available to tell your fortune by throwing his bones; dancers entertain with Shona and Ndebele acts; and then ... there's the vat of Mopane worms.

Most people who enjoy Mopane worms obviously do not get certificates when they eat a solitary grub. Normally, you'll see huge bags of dried and/or smoked Mopane worms in local markets throughout rural Zambia, Zimbabwe, Botswana, South Africa and Namibia. They're greyish looking when dried (after their green guts have been squeezed out) and at first glance you might think they're a bean of some kind.

Mopane worms get their English name from hanging out on Mopane trees which are prevalent in Southern Africa. And they are not worms, but caterpillars, the larvae of the Emperor Moth. The best time to harvest them is when they are at maximum plumpness, late in their larval stage and before they bury themselves in order to re-appear as an Emperor moth. The Mopane worms like the Mopane tree, but they also feed off mango trees and other bushes. They are a seasonal delicacy, but you can also buy cans of Mopane worms soaked in brine in some local supermarkets. I looked around in vain for them at local Spars and Shoprites -- but failed to find them on my last trip to the area. Great souvenir idea I thought.

Mopane (sometimes spelled Mopani) worms are called phane in Botswana, mashonja in Zimbabwe and parts of South Africa, and omangungu in Namibia. Nutritionally they pack a punch consisting of 60% protein along with good amounts of iron and calcium. Since they require little input in the way of resources, it has become a valuable and profitable source of food and income. In South Africa it is a muli-million Rand industry. I heard complaints about the smaller size of mopane in a rural market in Livingstone, Zambia. Most likely a case of harvesting them too soon. Deforestation and over-harvesting are both issues that are affecting the supply of mopane worms.
Posted by Sharon Hall at 1:54 AM No comments: