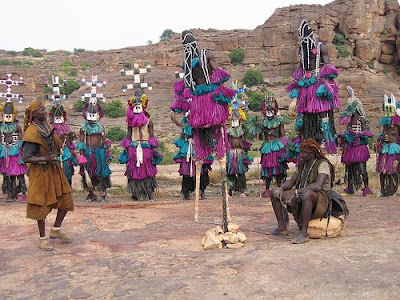 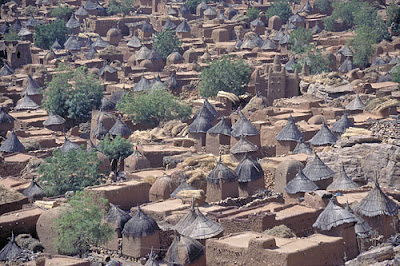 Earth of Dogon (Bandiagara plateau) are in the area of ​​the city Duentsa. Dogon tribes, believed to have been original inhabitants of the Niger river valley during the time of the Great Pharaohs of Egypt. For thousands of years Dogon live in the villages, built of red sandstone, built their granaries, destroying them directly in the surrounding rocks and collect the meager yields on very small plots, in the form of terraces cut in hard rocks on ledges.

Their homeland, Dogon Plateau, has been included by UNESCO among the world cultural heritage sites because of its unique living conditions and the level of safety in the beliefs of the ancient inhabitants of ideological representations of people. While most of the Dogon have moved from well-protected shelter in the cliffs on the plain below the hill, the ancient villages still inhabited, and the cliffs are still building new villages.
Posted by Sharon Hall at 5:05 AM No comments: