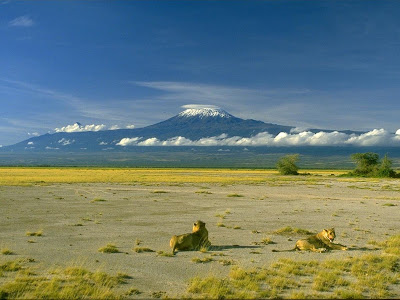 In general, Kenya - is a safe country, but there are a few rules that visitors must comply. For example, during the safari in national parks is forbidden to leave the place of residence without being accompanied by guards. And during the safari itself it is forbidden to leave the car without the permission of the guide. In Kenya, unlike in some other southern African countries, it is strongly prohibited hunting on wild animals. Violators will face a serious punishment: a large fine or even imprisonment. Do not wander alone in Nairobi after 18.30. In Kenya, it darkens very quickly and at 19.00 is quite dark. Keep track of your pockets and bags, pickpockets in Kenya are as much as in any other major tourist center.

It is not recommended to take pictures of local people without their permission and independently (without guide) to visit the homes of local residents, especially the Maasai. Ignorance of local ethnic customs can lead to misunderstandings or even conflicts. 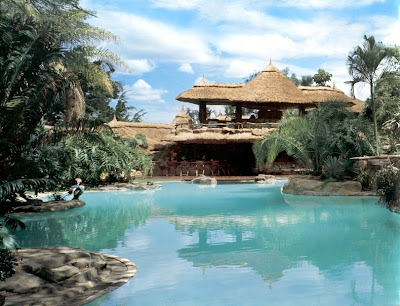 Malaria - is a disease prevalent in the Indian Ocean and Western Kenya. Therefore, everyone who comes to Nairobi, it is recommended to take preventive measures. The treatment begins with a week before entering the country, continues during the entire trip and 6 weeks after it. Anti-malarial tablets and certain medications can be purchased at pharmacies and supermarkets. A permanent inhabitant for these places is also a causative agent of yellow fever, therefore, it is compulsory to make vaccination for a trip to Kenya. Big cities have modern hospitals, have excellent medical facilities at Nairobi. If you are sick, so-called flying doctor will take you to Nairobi from anywhere in Kenya. It costs $ 25. It is al 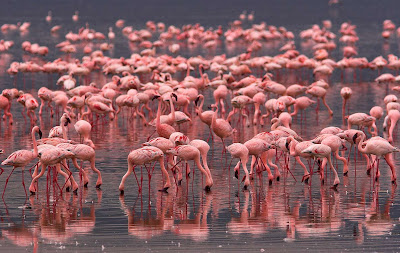 so recommended during a safari to close the open parts of the body and use special tools against insect bites.

It is not recommended to drink water from the tap and buy fruit from street vendors. It is better to use only bottled drinks and canned packaging, and vegetables and fruits sould be well-peeled and washed before eating.

Posted by Sharon Hall at 3:02 AM No comments: 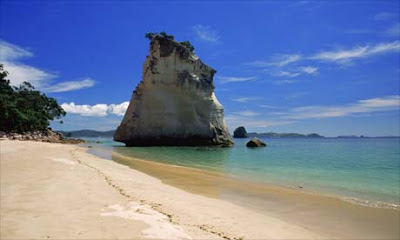 Madagascar, larger than California and about size the size of Texas or France, is the world's 4 th largest island. Isolated in the Indian Ocean off the coast of southern Africa, about 70% of the estimated 250,000 species found on the island exist nowhere else on the globe. The island is home to such evolutionary oddities as lemurs, a group of primates endemic to the island; colored lizards including geckos and chameleons; tenrecs, spiny hedgehog-like creatures; and the fossa, a carnivorous animal that looks 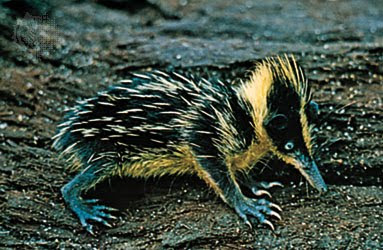 like a cross between a puma and a dog but is closely related to the mongoose.

Nevertheless, Madagascar is an extremely poor country with poor infrastructure -- flying is often the only option to get between points since roads, when they exist, are frequently in bad condition 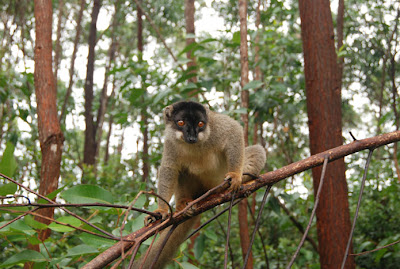 . Phones and internet access are unknown in parts of the country and in some villages, children have never seen a person with white skin. Also, despite it's poverty, Madagascar is not a particularly cheap destination for most western tourists who are not willing to put up with the discomfort, frustrations, and hassles of public transportation.


Madagascar's wildlife is among the best in the world in terms of diversity, abundance, and approachability and travel to Madagascar for this purpose is 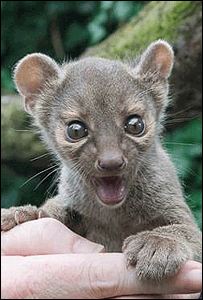 most rewarding. Deciduous forests, crystalline lakes, massive caverns, and savanna grassland dot the broad western plains, and the southern tip of the island is covered with a magnificent desert. Madagaskar is crisscrossed by no less than 6 different micro-climates!
Posted by Sharon Hall at 4:04 AM No comments:

The Sahara - the hottest place on Earth 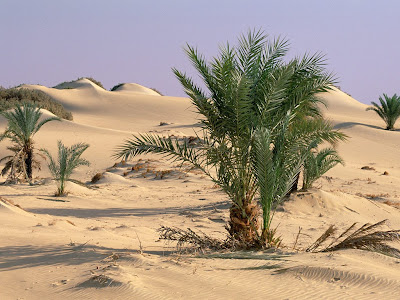 The Sahara is one of the hottest places on Earth. Even though temperatures there may rise to 136 F (57.7 C), its dryness, not heat, that makes a place like the Sahara a desert. The frozen continent of Antarctica is so dry that some scientists consider it a desert, too.
By studying satellite photos, some scientists have come to believe that the Sahara regularly shrinks and grows. In the early 1980s, the Sahara's southern edge expanded into the Sahel, a dry band that separates the desert from the savanna. But by the mid-1980s this area was green and wet again.

Due to the massive size of the Sahara, Africa is split into 2 regions: that which lies above or forms part of the Sahara and the rest of Africa south of the Sahara. On the west, the Sahara is bordered by the Atlantic Ocean and on the east by the Red Sea, and to the north are the Atlas Mountains and Mediterranean Sea.

Many researchers have gone into the Sahara looking for clues as to how long ago humans began inhabiting the desert. According to archeologists, the Sahara was much more densely populated thousands of years ago when the desert's climate was not as harsh as it is today. Fossils, rock art, stone artifacts, bone harpoons, shells and many other items have been found in areas which today are considered too hot and dry to inhabit. This suggests that these areas were quite habitable thousands of years ago, but that the climate of the Sahara has sin 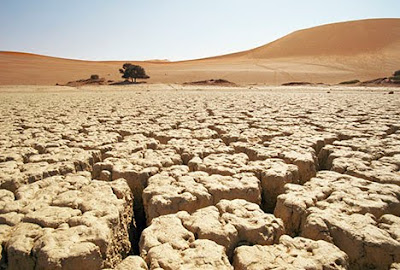 ce changed drastically. The artifacts found were located near remains of giraffe, elephant, buffalo, antelopes, rhinoceros, and warthog, as well as the remains of fish, crocodiles, hippopotamuses and other aquatic animals which suggests that thousands of years ago water was quite abundant in the Sahara.

The majority of the people living in the Sahara Desert are nomads, which means that these people continuously move from region to region in search of better living conditions. It is believed that the first nomadic peoples came to this region after domestic animals were introduced to the Sahara 7,000 years ago. Researchers believe that sheep and goats were introduced to the Sahara region by the Caspain culture of northern Africa.

Many of the Sahara's winds have special names:

Haboob is the Arabic name for a wild, sand-laden wind.

Khamsin, also Arabic, means "50 days." This wind sweeps across the desert from March through May, filling the air with sand.

The name of the desert wind Harmattan comes from a word in the West African language Twi that means "to tear your breath apart."


Sand dunes make up only about 15 % of the Sahara, but the desert is so huge (about 5.63 million sq km) that even a single dune may be enormous. The sand dune known as the Libyan Erg is as big as France.

About 70 % of the Sahara consists of rocky plains covered with stones and gravel. Shale and limestone plateaus or mountain ranges make up the rest. Before the Sahara became a desert, it was home to many savanna animals, including the giraffe. People began to paint and etch the 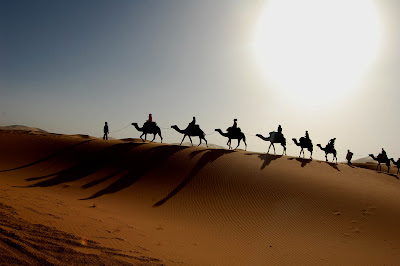 Sahara's animals in desert rock about 12,000 years ago. Archaeologists estimate that the oldest remaining pictures date back to 6500 B.C.

By looking at paintings and etchings created thousands of years apart, we can see how life changed as the Sahara slowly became a desert.

Posted by Sharon Hall at 3:45 AM No comments: