The Cradle of Humankind 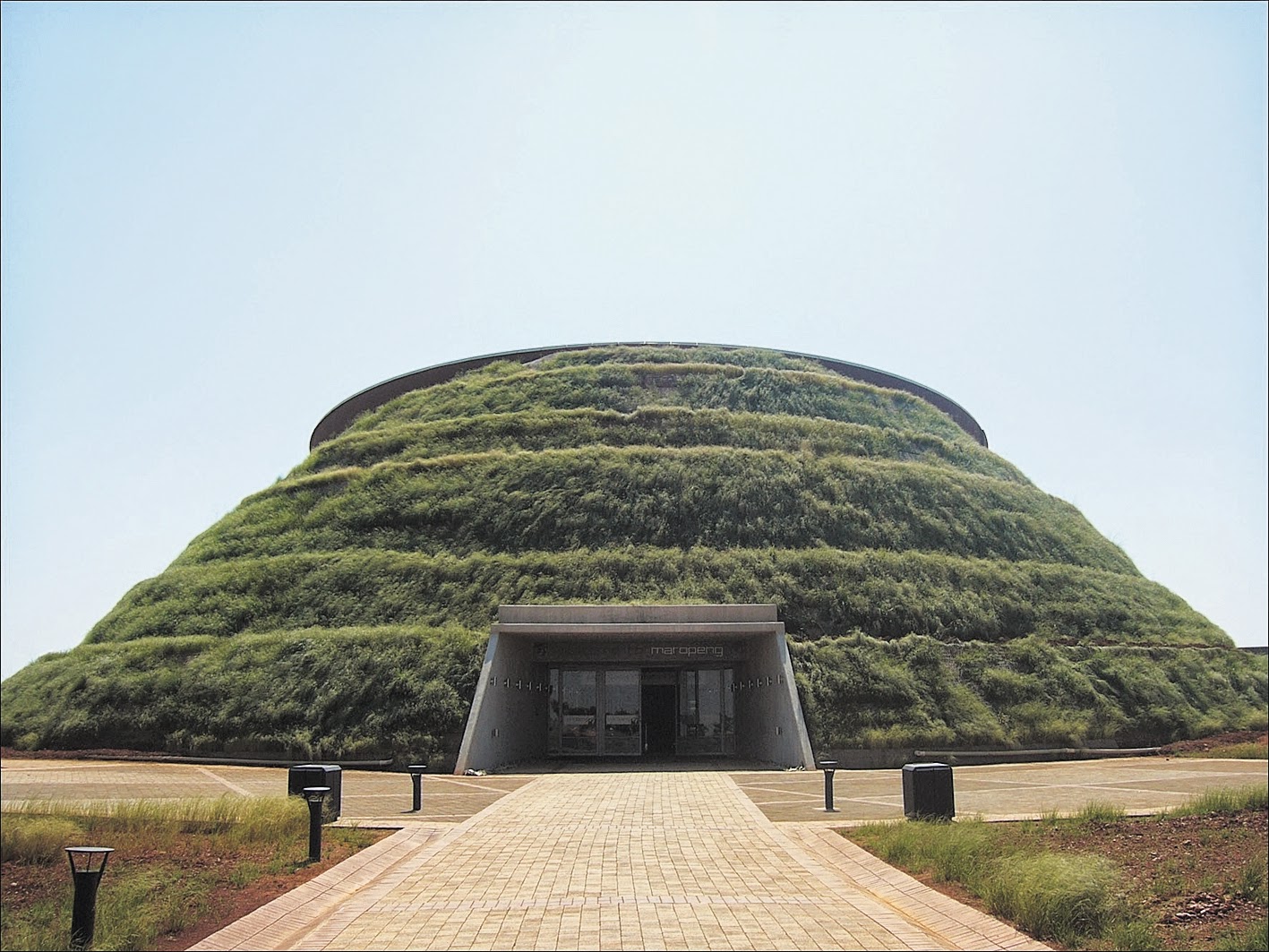 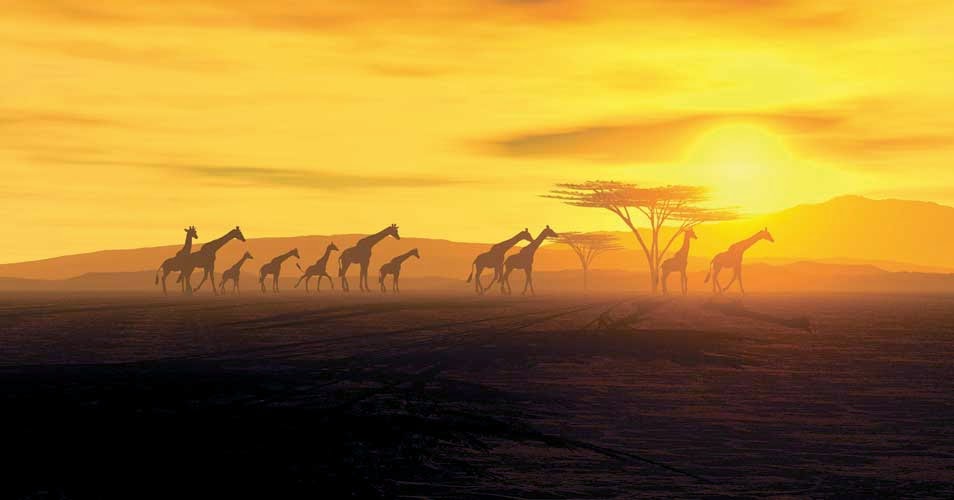 The Cradle of Humankind has in recent years become one of Johannesburg's top attractions, and for good reason. This unique and beautiful spot, widely regarded as the origin of what we now refer to as mankind, or just humans, is just a short drive north of the bustling city.

The Cradle of Humankind is now home to a number of fascinating museums, superb restaurants, and accommodation options to suit most tastes and budgets; a trip to South Africa is no longer complete without at least a day spent tracing your origins here.

Technically, the Cradle of Humankind lies within the Greater Magaliesberg region, and since 1999, it has been classified as a UNESCO world heritage site. As a result, over the last 6 years a significant amount of money, time and care has been invested in the area to make sure that it's not only a fantastic place to spend a day or weekend, but also that it'll be around for many years to come, while meeting the strict guidelines laid out by UNESCO.

The Cradle of Humankind is close enough to do in a day, but to really get full value from the region, plan to spend an activity-packed weekend in the area. Make sure you leave the city of Joburg nice and early and make your first stop - the celebrated Walter Sisulu Botanical Gardens. Don’t worry if you can’t make it on the way there – a visit on the way back from the region is also a good idea.

Spend some time wandering the vast grounds, breathe in the fresh air and absorb everything that one of the country’s best-maintained botanical gardens has to offer. Of particular interest to bird watching enthusiasts, the gardens are home to more than 220 bird species, as well as the ever-popular breeding pair of Black Eagles nesting on the cliffs above the waterfall.

Take in some wildlife

Now that your interest in wildlife has been ignited, head through to the Krugersdorp Game Reserve, where you can spot more than 180 species of animals, including various large and small antelope, as well as lions which are separated in a large enclosure.

From the Krugersdorp Game Reserve, plan to head through to the core of the action in the Cradle of Humankind – The Maropeng Visitor Centre. It’s a good idea to pick up a combination ticket at the visitor centre, which allows you full access to both Maropeng and the Sterkfontein Caves nearby.

The Maropeng Visitor Centre is an award-winning establishment that caters for all age groups. There are 2500 square meters of exhibitions that can be viewed from an exciting underground boat ride, and which guide you through the world of fossils, ancient stone tools up to 1 million years old, and how humankind was born. There is also a big emphasis on interaction at Maropeng, which makes it perfect for youngsters as well.

Leave Maropeng with combo ticket in hand and head to the nearby Sterkfontein Caves. These caves are where the famous 2.1-million-year-old skull of “Mrs. Ples” was discovered, and informative trips are taken down into the caves at regular intervals. The nearby restaurant is a good spot to grab some lunch and plan the rest of your day as well.

If you’re interested in some of the world’s largest and most popular animals, be sure to stop in at the Rhino and Lion Nature Reserve, where you can get up close to a selection of wildlife in 1200 hectares of bushveld.

Take in an African sunset at Heia Safari Ranch

Heia Safari Ranch is one of Gauteng’s oldest and most popular tourist attractions and is set in the most perfect tranquil indigenous bushveld. Giraffe, zebra, springbok and wildebeest roam the grounds, and Heia Safari Ranch offers guests a unique African experience that’s sure to leave you yearning for more. There are 50 thatched 2-bedroom bungalows to choose from, each of which have full bathroom facilities, and all the comforts to relax in the heart of the Cradle of Humankind route.

If you didn’t manage to fit them in the day before, the Wonder Caves and Cradle Nature Reserve are also well worth a visit. Also be sure to pay a visit to the Lion Park, and stop in at the fascinating Muldersdrift Village before leaving the Cradle for a gentle drive back to the city. Or, of course, you could just continue on to the our Magaliesberg Route for a few more days outside of the hustle of Johannesburg.
Posted by Sharon Hall at 7:50 AM No comments:

The fourth longest river in Africa, and the longest East flowing River in Africa.  This mass of water flows “through” six countries. Well, it flows through three, Zambia, Angola and Mozambique and is the river boarder between Zambia and Namibia, Botswana and Zimbabwe.  Whilst most reports states that the Zambezi rises and heads South West into Angola, in actual fact,  the Zambezi flows in all directions of the compass. 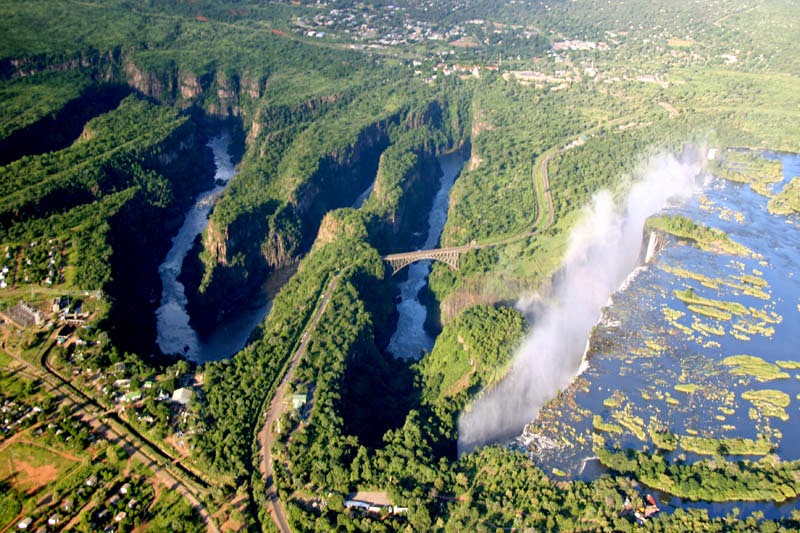 The Zambezi rises in North Western Zambia, a tiny bubbling puddle in the Mukangala area in the Mwinilunga district.  The site is both a National Monument and located in the Zambezi Source National Forest so is doubly protected.  The National Forest is also the home to two endemic plant species, Dissotis glandulosa, a perennial herb, and Elaphoglossum zambesionaum.  The river flows North, North East, slowly curving round before the border with the DRC and then flows East towards the Zambia/Angola boarder.  Once it crosses over into Angola it starts flowing in a South Westerly direction.  The Lumbala joins the Zambezi in Angola just as the river heads back towards Zambia before flowing South, through the Western Province. 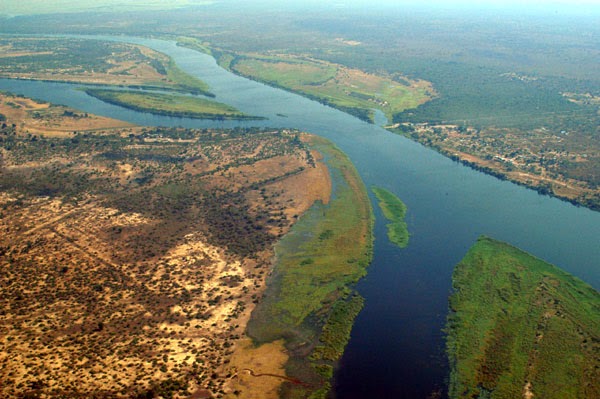 This Upper Zambezi portion of the river is a beautiful remote area with a vast floodplain and sparkling white beaches so clean the sand squeaks as you walk on it.  Flowing through the Barotse Floodplain the river in full flood can reach a width of 25Km. 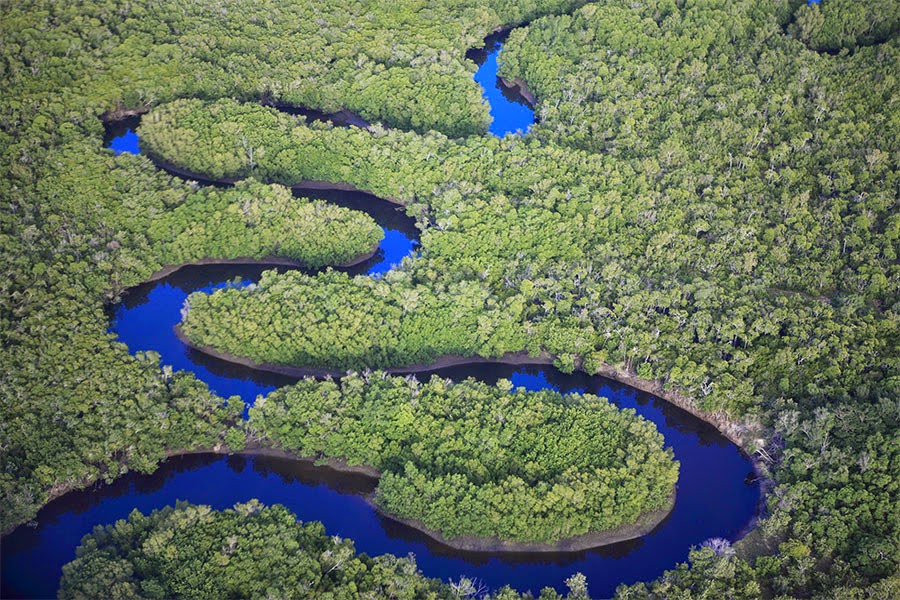 These floods dominate life, society, culture and the environment.  A spectacular ceremony, the Kuomboka takes place every year when the Litunga, the King of the Lozi people, moves from his residence at Lealui to Limulunga on higher ground.  Kuomboka means “to get out of water”.  The ceremony lasts for five days with the actual Kuomboaka taking place on the third day.  With much pomp and ceremony the Litunga boards his vast barge, Nalikwanda, painted black and white with a huge black elephant, complete with ears that flap, on the roof of the pavilion under which the Litunga sits.  The Litunga’s wife is transported in a second smaller barge with a cattle egret, with flapping wings, on the top.  The Nalikwanda is a spectacular craft of royal proportions with room for the Chief, his attendants, the royal musicians, and at least one hundred traditionally-clad paddlers.  The royal barges are accompanied by a huge flotilla of boats, barges and canoes with beating drums and traditional songs.  The last two days of the ceremony are a festival of dance and song welcoming the royal family to their second home. 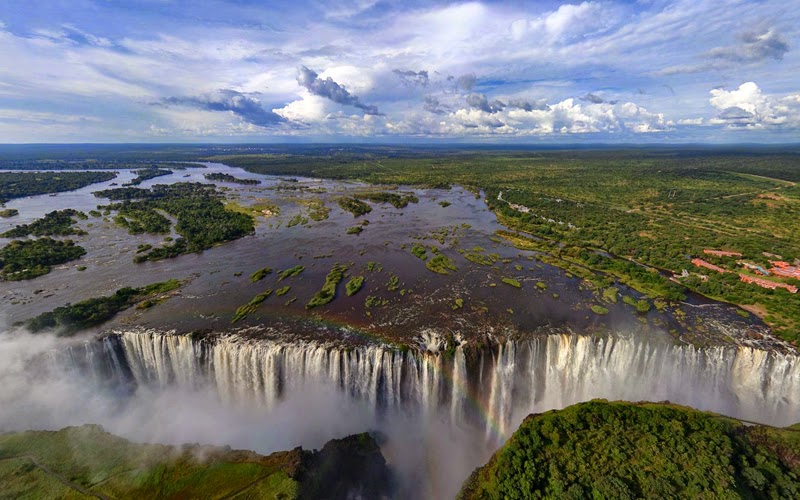 And so, the Zambezi flows on South tumbling over the Sioma Falls and the rapids downstream before  it meets up with the Zambia/Namibia border and turns to flow towards the East along the Caprivi Strip, a wide, shallow slow flowing river.  A brief meeting with Botswana before the river meets the Zimbabwe border.

The Victoria Falls!  Considered the boundary between the upper and middle Zambezi, the river suddenly plunges, the world’s largest sheet of falling water, down one hundred and eight metres into a fissure in the basalitic rock churning in the boiling pot, squeezed through a one hundred and ten metre gap into the Batoka Gorge, zig zagging through six more principle gorges, churning over a succession of rapids before it calms down and flows into Lake Kariba.

Lake Kariba was created in 1959 following the building of the Kariba Dam wall.  One of the largest man-made lakes in the world, this vast lake is truly massive.  Travelling on the Lake there is water as far as the eye can see, 220Km long and, 40Km at its widest.  The building of the dam was, like all projects of this scale, controversial.  Large numbers of Batonga people were resettled and minimally compensated for their loss.  The powers that be at the time decided that the economic advantages outweighed the loss to the traditional residents of the area.  The name Kariba comes from Kariva, meaning trap, referring to a rock at the entrance to the gorge at the dam site, regarded as the home of Nyaminyami, the River god.

Today the Lake has developed and changed.  Fishing and tourism are the main industries in this truly beautiful place.

The River is now controlled, harnessed as it is released through the turbines of the power station generating electricity for both Zambia and Zimbabwe.  Occasionally, very occasionally, after heavy rains, the gates are opened and the water thunders out.  The wall buzzes.  Static electricity makes your hair stand on end.  Once more the river is constrained to a rock gorge.  In some places over 30 metres deep with spectacular hills rising up on both sides.  As the river comes out of this gorge and flows on Eastwards the curious onlooker may notice a large, bare patch on the Northern hills, possibly a meteor strike in the late 1970’s when the Rhodesian conflict meant there were very few witnesses in the area.

Under the Chirundu Bridge and the Otto Beit Bridge, the border post between Zambia and Zimbabwe.  The first bridge was built in 1938 – 39, financed by the Beit Trust.  This was the first modern suspension bridge outside the US built with parallel wire cables.  The increasing number of trucks using the bridge and the restrictions of a single lane made this a very congested crossing so a second bridge was built and opened in 2002.

The river is now busy with traditional fishermen in dugout canoes, social fishermen trying their luck, canoe safaris drifting downstream.  More and more lodges start appearing on the banks of the river.  Hippos sunbathe and crocodiles slide quietly into the constant flow, elephant swim and play.  If you are very lucky you may see a lioness and her cubs.  The cry of the fish eagle as it throws its head right back proclaiming its territory.   Officially the Lower Zambezi starts at Cahorra Bassa but in Zambia the area downstream from Chirundu is referred to as the Lower Zambezi.  In places the river is shallow with boat catching sandbanks and reed islands.  The Lower Zambezi National Park on the Zambian bank and Mana Pools on the Zimbabwean side, a spectacular sanctuary with herds of buffalo, a cautious kudu, a glimpse of a bushbuck, the chance to experience the adrenaline heart thumping of catching a tiger fish, see it jump once, twice, weigh it, photograph it, then release it and watch it dart away.

Onwards the Zambezi flows, leaving Zambia and entering Mozambique to meet one more dam wall, Cahorra Bassa, before it splits and shreds into the Zambezi Delta and so, into the Indian Ocean.  How long would it take a Pooh stick to make that 2 700Km journey, one can only wonder.

Posted by Sharon Hall at 7:38 AM No comments: