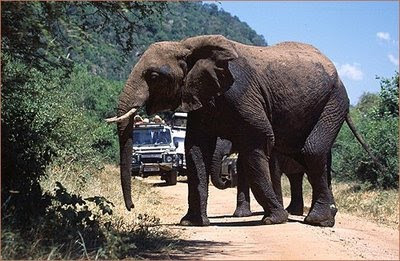 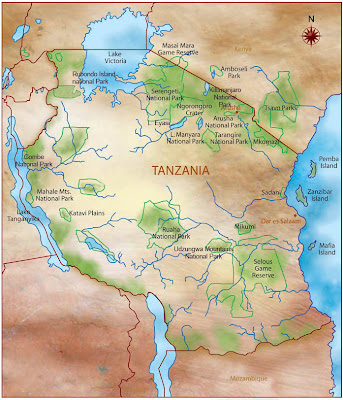 Once a country has committed itself to democratic reform, she became the fastest growing tourist destination in Africa. Confirmed not only the growing flow of tourists, but also sharply increased foreign investment in infrastructure in the rest of the country. In recent years, are noticeably more active leading international hotel chains, among which - Kempinski Hotels and Resorts and Movenpick and Sun International. According to the Regional Director of Kempinski Hotels and Resorts Marcus van der Wahl, Tanzania - one of the most promising tourism markets of the modern world, so Kempinski opened here 3 of its hotels. Mr. Wahl is sure that plenty of tourists will not be. According to preliminary estimates, Tanzania in 2006 to visit more than 600 thousand tourists (for comparison, in 2005 there were 582 thousand 807 people).

In Tanzania there are the world-renowned attractions. For instance, a picturesque lake, the waters of which attract large flocks of flamingos during the breeding season, as well as the famous conservation parks in the north, the Serengeti and Ngor Ngor, where you can see a huge number of elephants and migrating wildebeest. The southern parks - Selous and Ruaha - located in the side of the popular routes, and even further - Katava, the area where the hunt lions, and Mahala - a real paradise for chimpanzees. Tanzania is the highest in Africa and one of the highest mountains of the world - Kilimanjaro, whose summit is always covered with snow and stunning views of the black continent.


However, the political situation in the country is still far from the perfect one and the latest news about Tanzania were preventive in nature. Time and again the authorities of different countries calling tourists to be careful when visiting this exotic country, especially before elections. While on the mainland past elections are held fairly peacefully on the islands, they are accompanied by demonstrations.
Posted by Sharon Hall at 11:51 PM No comments: 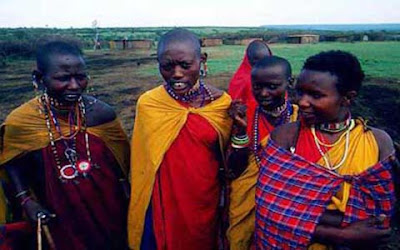 Africa in the minds of ordinary Europeans is a single part of the world, without division into nations and peoples. "Progressive" Europeans can divide the Arab part of Africa. And few of us guesse that the ethnic composition of Africa, such as colorful as the clothes and ornaments of its residents. By the way, just clothes, Africans and find out where you came from. It's no secret that the basis of government in almost any African country are inter-tribal relations. The laws and traditions of the tribes still play an important role in the lives of Africans. So it turns out that the national costumes in Africa can be quite different not only among nations, divided by national borders, but also the residents of neighboring villages.

For many centuries in Africa are that comfortable, and that the easiest way to sew. But often the stitching is "something" was simply nothing. That is why the basic components of the national African dress are either ordinary pieces of colored cloth, or skins of the same colored animals. All this, as a rule, looks very well with a lot of fashion accessories from beads, feathers, bones and all.


For example, the typical representatives of the people vasukuma (meaning "northern people") that lives in the savannas of the southern shore of Lake Victoria, have great respect for the different covers of the skin of animals that come across his arm. It is unlikely that these African natives ever heard of the concept of "unisex" but to distinguish a man's "jacket" from the female, they still refuse. "Moon People" (vanyamvezi) found on the plains in the areas of Tabora, Shinyanga and Mwanza, that not far from Lake Victoria, and people are people, Jagger, with whom you can meet in the southern and eastern slopes of Mount Kilimanjaro, also choose to cover their bodies entirely fur and leather capes. Moreover, they are on their feet more and tails of animals, considering them an integral part of their national clothes. Clearly, focusing on a hunt, these tribes have not heard anything about the Society for the Protection of Wildlife ...


The second largest nation of Tanzania - Maasai dress, of course, different. In addition, they actively use a variety of accessories to create their unique images.


In the clothing they prefer red colors, and designs of their costumes are much simpler than in Swahili. Matter, which is usually wrapped in Masai, is decorated with either stripes, or cell, where the red color, as a rule, combined with the blue.


But this is not the most important thing in clothes Maasai. Women are just that people hung around the neck world-famous, massive decorations from wire, which over time greatly lengthen the neck, that the Maasai is the first sign of feminine beauty. It is also believed that women's hands Masai designed to be decorated with innumerable bangles. Even men Masai very partial to beads and bracelets, but still showing some gender modesty in this regard.


But do not wear and do not even make the beads "Masaya masala, and ... ears. Children under the age of seven pierced earlobes splinter horn. Then the hole expanding wood pieces. Over time, heavy ornaments of beads or beads retard earlobes to his shoulders. And it is believed that the more Masai diverted earlobes, the more beautiful and respected. 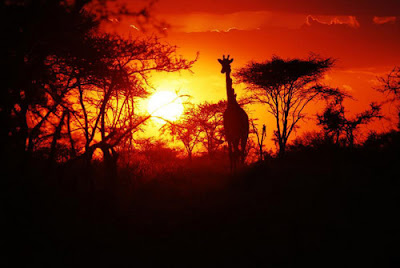 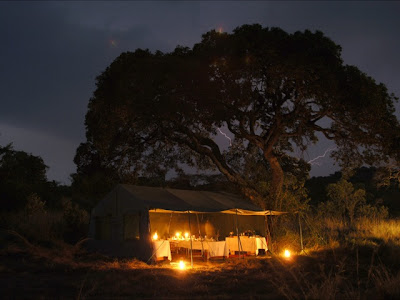 For years, tourists came to Tanzania to observe the animals in the reserves only in the afternoon. But now the guests of the National Park Lake Manyara will be able to make nightly visits to machines open. Accompanying the group will be an experienced guide. On tour you can go from 20.00 to 22.30.

The main purpose of travel will be monitored for nocturnal species of animals, as well as leopards, porcupines, wild cats, genets, galago, antelope, white-tailed mongooses, and many others, reports Afrikana.ru. During the trip, you can also see many rare birds, nocturnal, tree-climbing lions, came down for the night on the ground. Guide can tell a lot about frogs, insects, learn to recognize the night sounds of the African forests and savannas. All evening journeys will huntsman. Its mission - to find animals with a night lamp. As soon as the ranger determine location of the animal, immediately be included protective filters on lamps machines that provide less concern to representatives of the fauna.
Posted by Sharon Hall at 3:52 AM 1 comment: